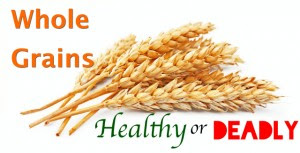 Traditionally grains were soaked and sprouted or fermented. These processes effectively disarm the toxins of the seed and result in a relatively nourishing, digestible food. Until recently, grains were also grown in healthy organic soil without the use of any chemicals, and never cultivated in overblown, subsidized, monoculture plantations like those we have today.
Grains are naturally a “high-maintenance” food requiring extensive traditional preparation to become digestible and nutritious to humans. On top of these issues, the modern farming and processing methods of grains have made them even less suitable for human consumption.
It’s clear that the grains in our supermarkets today have unfortunately become highly inflammatory and toxic pseudo-foods. They make up far too much of our cultural diet and mainstream nutritional recommendations.
Six to eight servings a day? No thanks!
Stick with vegetables and protein for the vast majority of your diet. For the occasional healthier baked treats, try using safe starches such as almond meal, flax meal, white rice flour and coconut flour instead.
Posted by Unknown at 8:55 AM