Reduce Arthritis Pain and 20 Other Benefits of Cinnamon 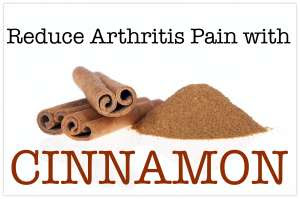 Treats osteoporosis
High levels of manganese in cinnamon can help build bones, blood, and connective tissue in the body. As a result, cinnamon is an excellent supplement for those with osteoporosis. Manganese-deficient individuals are at greater risk for osteoporosis. Also people who already have osteoporosis require more manganese to compensate for their lower bone density.
Treats pain and arthritis
Cinnamon can be used as a warming agent for massage oils and bath water to relieve muscle pain. The oil is used as a natural massage treatment for those suffering from arthritic pain, and cinnamon tea is used by arthritis sufferers to calm the mind and relieve nerve pain.
Flu remedy
Cinnamon’s antibacterial properties can protect against stomach bacteria, fecal bacteria, and even flu-causing bacteria. Cinnamon can also relieve the aches associated with flu. And the compound cinnamaldehyde in cinnamon is effective in protecting against the adenovirus.
Lowers cholesterol
Two separate studies—one performed in Pakistan, and another published in the journal, the Annals of Family Medicine—found that cinnamon can reduce triglycerides, LDL cholesterol and total cholesterol. Although it does not directly impact cholesterol, cinnamon lowers cholesterol indirectly by affecting how the body processes sugar and fat. Another 2003 study published in the Diabetes Care journal revealed that taking as little as 1 gram of cinnamon daily can lower triglycerides, LDL and total cholesterol in diabetics.
The FDA does not approve the use of cinnamon to cure any disorder or illness. The information presented in this article is meant for educational purposes. Always speak with your doctor before taking any dietary supplement, including cinnamon, especially if you are at risk of liver problems, as regular intake of cinnamon may increase your risk.
Overall, adding cinnamon to your diet is a wonderful way to improve overall health and wellbeing so that you can feel and look your best. Adding just a little to your daily meals or warm beverages goes a long way!
-The Alternative Daily
Posted by Unknown at 2:01 PM