Work this Little Seed Into Your Diet for Amazing Health Benefits

Work this Little Seed Into Your Diet for Amazing Health Benefits

If you’re looking to add just one superfood to your diet this summer, flax seeds are a prime contender. These ancient versatile seeds (also known as linseeds) come from flax, a flowering plant with attractive blue flowers, and their nutritional and antioxidant benefits cannot be beat.
The cultivation of flax was first recorded in the Mediterranean region and the Middle East between 4000 and 2000 BC, though some historians say that it could have started as early as 10,000 BC. The seeds were eaten for sustenance, and the fibers were used for various textiles. Both of these uses of flax continue to this day.

One of the best-known benefits of flax seeds is their high concentration of omega-3 fatty acids, mostly in the form of alpha-linoleic acid (ALA). Flax seeds actually contain a higher amount of omega-3′s than any other vegetarian food. These essential fatty acids provide a multitude of benefits to the cardiovascular and nervous systems.

Besides lowering blood triglycerides and boosting cognitive function, omega-3s are linked to improving symptoms of depression and ADHD, and possibly preventing the onset of Alzheimer’s disease and other age-related cognitive impairments. They also have potent anti-inflammatory properties, which can protect against a host of chronic illnesses, and may ease the pain and other inflammatory symptoms of existing conditions, such as arthritis and asthma.

The heart-healthy benefits of flax seeds go beyond lowering triglyceride levels. They have also been found to lower blood pressure levels and reduce belly fat deposits. These little seeds are high in fiber, which is important for cardiovascular function, as well as for keeping blood sugar levels stable and promoting optimal digestion.

One type of fiber found in flax seeds is mucilage, which is a water soluble form of fiber that forms a gel when digested, which improves the ability of the small intestine to absorb many nutrients.

Another primary benefit of these ancient seeds is the presence of lignans. Lignans are polyphenols which pack a triple punch: they are antioxidants, fiber and phytoestrogens in one. The phytoestrogens found in flax seeds bind to estrogen receptors in order to block stronger estrogens from dominating.

This effect has been tied to slowing the growth of some hormonally based cancers, including breast and prostate cancers. These phytoestrogens have also been found to help balance hormones and relieve menopausal symptoms in women.

In a 2005 study performed by researchers at the University of Toronto, muffins with either 25 grams of flax seeds or placebo muffins were given to breast cancer patients on a daily basis for one month. At the end of the month, the researchers observed an increase in “programmed cell death” of breast tumor cells in the women that ate the flax seed muffins versus the placebo.
Aside from these benefits, flax seeds are a great source of protein, and are rich in minerals including calcium, copper, iron, magnesium, manganese, phosphorus, potassium, selenium and zinc. They also contain B-vitamins, vitamin E and vitamin K. These nutrients combine to make flax seeds a very nourishing, well-rounded food which is great for snacking on the go, as well as incorporating into meals.

Flax seeds boast a pleasant, mild, nutty flavor. Some people like to eat them raw by the spoonful. Others grind the seeds and bake them into bread and other baked goods along with their favorite gluten-free flours.

They can also be added to smoothies and used to top yogurt, to name only a few ideas. Make sure to purchase organic flax seeds; you can find them in your local organic market either whole or pre-ground.

Note: Make sure to grind your flax seeds; an unground seed can go through your digestive system without breaking down the hard outer shell, negating the health benefits of this excellent seed.

With this superfood, the serving options are endless, and the health benefits are vast.

Posted by Unknown at 8:53 AM No comments:

Mrs. Obama talks to Everyday Health about the importance of nutritional standards. 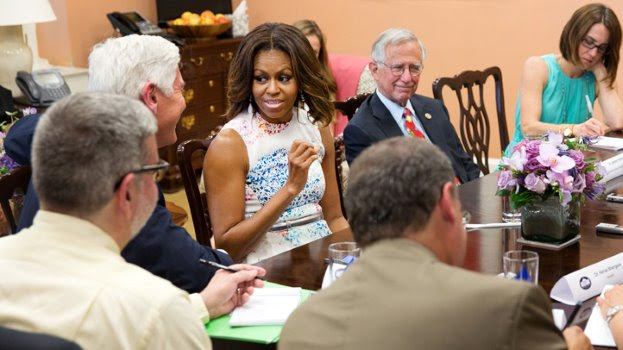 Official White House Photo by Chuck Kennedy
Michelle Obama meets with medical correspondents in the First Lady's East Wing Office of the White House.
First Lady Michelle Obama called efforts to roll back provisions of the Healthy, Hunger-Free Kids Act of 2010 “unacceptable.” Meeting with a small group of medical correspondents, including Everyday Health, at the White House on Wednesday, Mrs. Obama highlighted the importance and successes of the nutritional standards, saying they are “critical to the ultimate success of a generation of young people.”
Joining the First Lady were American Academy of Pediatrics President Dr. James Perrin and Sam Kass, executive director of the “Let’s Move!” initiative and senior advisor for nutrition.
“The stakes couldn’t be higher,” Kass said. “Both in terms of the impact this can have on our children, and the precedent it’s setting for putting politics ahead of science.”

Under the Healthy, Hunger-Free Kids Act of 2010, school cafeterias have to offer lunches that include whole grains, more fruits and vegetables, and skim or low-fat milk. It limits the caloric value of meals to 850 for high school lunch and between 550 and 650 calories for elementary school lunch.
Dr. Perrin stressed the importance of “good nutrition early in life,” particularly in terms of what is served in schools. “One in six children live in hungry homes [and] much of their nutrition comes from what they get at school,” he said. He also pointed out that “children consume on average about half of their calories in school.”


Congress passed the Healthy, Hunger-Free Kids Act in 2010 with bipartisan support. But critics say the standards are too costly and difficult for some schools to meet. The School Nutrition Association (SNA), a major supporter of the Act, is asking that schools be permitted to opt out of the requirements.
“I find myself surprised that we’re here,” Mrs. Obama said. “Just a few years ago, everybody was around the table celebrating this victory…that school nutrition standards had been improved for the first time in 30 years.”

Regarding the SNA’s position, Mrs. Obama added: “School nutritionists were some of the biggest advocates and the proudest of these changes. I don’t think fundamentally they want to overhaul this.”
According to the U.S. Department of Agriculture, over 90 percent of schools are meeting the updated nutrition standards and participation is increasing in many parts of the country.

“You think of any project [where] you reach 90 percent success or completion. Would you ever think, well, let's just stop now and start all over again because we have 10 percent left to do?” Mrs. Obama said. “That's where we are right now, and that's just unacceptable."

Despite concerns about cost associated with meeting the nutritional requirements, the USDA reports that school revenue is up. An analysis suggests that in the first year of the standards’ implementation, schools saw a $200 million net increase nationwide in revenue from school lunches.

Another concern has been that the revised nutritional standards might result in plate waste, as children reject healthier meal options. However, a study by the Harvard School of Public Health found that plate waste had not increased as a result of the standards.

“We’re not even thinking about the possibility of rolling back because we can’t afford for that to happen,” Mrs. Obama said. “We want to make sure everyone is informed about what is actually being proposed.”

Posted by Unknown at 8:47 AM No comments:

Top 3 Ways Meditation Can Benefit You

Top 3 Ways Meditation Can Benefit You

The ancient art of meditation has been practiced for centuries. The earliest practitioners sought to better understand the nature of life and their purpose on Earth. Today, people meditate for any number of reasons, including self-exploration and stress relief.
Regardless of one’s purpose, meditation has numerous health benefits ranging far beyond relaxation. Here are three reasons why you may want to give meditation a try.


Instant mood booster
Who hasn’t experienced the stress and anxiety associated with the hustle and bustle of today’s world? With the demands of work, school, family and social life, it’s no wonder cases of depression and anxiety-related conditions are on the rise. But even a short mini-meditation session can uplift spirits.
According to research, shorter meditative sessions are as beneficial as longer sessions at combating negative moods. During a study with undergraduate college students, the students reported decreased instances of depression and anxiety as well as lower heart rates and less fatigue after three days of a meditation intervention totaling one-hour of meditative practice. So even a few minutes daily can reap long-term rewards.

Relief from aches and pains
Staring at computers, tablets and cell phones coupled with long trips in the car or hours spent sitting at a desk can wreak havoc on one’s skeletal and muscular systems. Combine these unnatural postures and positions with the stresses experienced on a daily basis and it’s no wonder more and more Americans are suffering from aches and pains.
However, research suggests that meditation can help relieve achy muscles and joints. Aside from deep breathing techniques that help transport oxygen more efficiently to muscles, the reduced anxiety experienced during a meditation session helps switch off the body’s natural stress response (and unfortunately, this natural stress response can lead to inflammation, which has negative health implications).

Increased immunity
There’s no denying that added inflammation and stress lead to a number of chronic conditions and weaken the overall effectiveness of the immune system. But regular meditation sessions combat both stress and anxiety and also aid in building a stronger immune system. In a study published in Psychosomatic Medicine, subjects took part in either an eight-week meditaion training program or were placed in the control group that underwent no training.
Both groups were then vaccinated with the influenza vaccine. Four months after the vaccination was distributed, subjects were evaluated again. Results indicated a significant increase in antibodies in the group who underwent the meditation training as opposed to the control group. So this year, when cold and flu season comes around, you may want to spend a few minutes daily in a meditative state to keep your immune system strong.
Depending on your goals or personal preferences, there are multiple ways in which you can meditate. Here are a few to choose from, each with their own unique contributions to the practice.
-The Alternative Daily
Posted by Unknown at 8:44 AM No comments:

Getting the sleep you need is important, find out more with Natural Solutions

Posted by Unknown at 7:58 AM No comments:


Bala Cynwyd PA: Diabetic Men and Women 18-49, 2hrs 45min $250 Visa (Gift Card) for your full participation, dates available 7/8 thru 7/15, times during the working hours. Fill out the link to be considered, we will make calls based on available quotas. https://docs.google.com/forms/d/1X216iq0ZH_zDyHQU572eguLLwjQWJjM9d8IAeOzawaw/viewform?usp=send_form


Additional Information: We are looking for Diabetics on medication; you will be required to bring your medication to the group with you, this is mandatory for participation.
Posted by Unknown at 2:26 PM No comments:

Posted by Unknown at 2:25 PM No comments: