Did you know that drinking tea can boost your immune system? While not all teas are created equal, some teas may actually help you prevent illness and even fight off infections.
Although your kids are bound to bring home germs from school, you can help keep them safe, and yourself protected, with these five immune-boosting teas.
Green tea


Green tea is high in antioxidants, including polyphenols. Polyphenols are natural immune-boosters that not only help prevent illness, but also help to stop it in its tracks. For instance, one type of polyphenol, a group known as catechins, may help kill the influenza virus. Brew your tea in just-below-boiling water to minimize the bitterness and maximize its benefits.
Matcha green tea has the highest concentration of antioxidants, and can be added to just about anything. Try using raw honey and fresh lemon to add flavor — these additions will also help boost your immune system.
Chamomile tea
Unlike green tea, chamomile tea is not a stimulant. In fact, it is an antioxidant-rich tea that will help you wind down after a busy day. Also, chamomile tea contains compounds that may actually increase production of white blood cells, macrophages and B-lymphocytes, which work to destroy viruses, bacteria, and fungi.
Chamomile tea blends often contain other immune-boosting ingredients, including dandelion and licorice, but chamomile is quite effective at warding off illness on its own.
Ginseng tea
Ginseng has been used as a medicinal herb for at least 5,000 years in China. The ancient Chinese believed it could increase your lifespan. Although this claim is not scientifically verified, ginseng may be effective at warding off infections and improving immune function, as it encourages both interferon and white blood cell production.
Ginseng, like green tea, can cause you to have trouble sleeping, so it is best taken in the morning or midday.
Elderberry tea
Elderberry is often found in syrups and gummies, but the best way to get the health benefits of the berry is in the form of a tea. Unlike many berries, you cannot eat elderberries raw. In their raw or unripe form, they can contain a chemical related to cyanide if not treated properly. However, elderberries have been used for centuries to help treat wounds, soothe respiratory illnesses, reduce inflammation in the mucus membranes, and relieve congestion.
Elderberries also contain flavonoid antioxidants, which help prevent damage to your body’s cells.
White sage tea
White sage is an herb found throughout the southwestern United States. It’s often sold in smudge sticks as an incense, but fresh or dried white sage can also be steeped in water as a tea. When used as a tea, it works as an anti-inflammatory agent that helps decrease mucus secretions and sweating as a result of illness. It may help to ease colds and sinus infections, and may also help prevent them.
To prepare this tea, steep the fresh or dried leaves in hot water for 10 to 15 minutes. Although it needs to steep longer than traditional teas, the health benefits are worth it, especially when you are feeling blue.
Other helpful options:
Although black tea contains fewer antioxidants than green tea, it contains a substance called L-theanine, which breaks down in the liver to prepare gamma-delta T cells to protect in the case of an autoimmune response. Gamma-delta T cells are the blood’s first line of defense against infections. Picrorhiza tea, a little known tea that is popular in Ayurvedic medicine, may also improve your immune system by stimulating production of white blood cells and interferon. 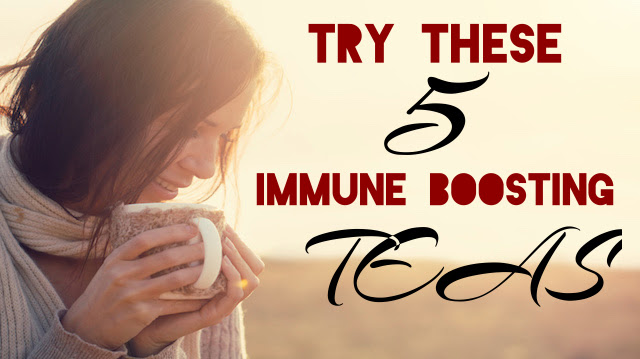 Red raspberry leaves can also be steeped to make an immune-boosting tea that may help to alleviate the symptoms of a cold, sinus infection, or flu. It may help to soothe inflammation, and tonsil and throat irritation. Kombucha tea is used to boost good bacteria in the gut to help support your immune system. It’s sold as a warm or cold tea, but can also be purchased as a natural soda — just make sure no additives have been used in the tea you buy.
Teas have been used as medicinal treatments for centuries. Instead of taking a pill that can make you groggy and leave you feeling terrible, try some of these teas and let us know if they work for you.
What teas do you drink regularly to promote optimal health? What health benefits have you experienced since drinking tea? What didn’t seem to work? Pass on your experiences to fellow readers in the comments below.
—Nicole Manuel
Posted by Unknown at 9:00 AM