Protecting your brain from age-related damage can be as simple as snacking. 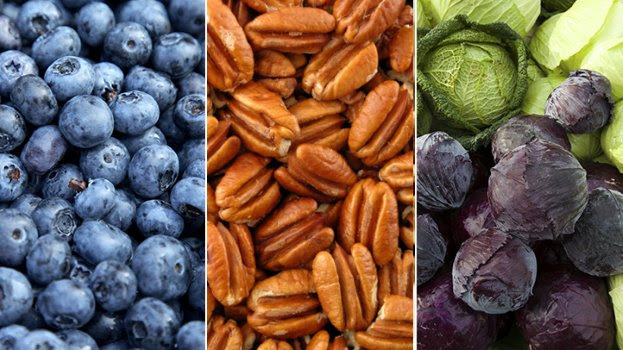 Blueberries, pecans, and Brussels sprouts are just a few foods that can boost brain health.


When it comes to what we eat, we usually worry more about our waistlines than our wisdom. But a diet that contains a wide assortment of healthy foods and nutrients doesn’t just benefit your body; it may protect your brain from cognitive decline as you age.

In order to defend against a variety of age-related conditions that can impair your memory and the general functioning of your brain, a good first step is to concentrate on incorporating three nutrients into your diet: omega-3 fatty acids, flavonoids, and vitamin E.
Hot Flashes? Prescreen for a Research Study
REPLENISHStudy.com

For your memory to function smoothly, your brain cells need to be able to communicate quickly and easily with one another. As people age, nerve cells shrink, nutrient-rich blood supplies to the brain decline, and inflammation often complicates the situation. The brain then produces smaller quantities of key messenger chemicals called neurotransmitters. At some point, communication between cells becomes less smooth and your memory skills suffer.
Omega-3 fatty acids, especially docosahexaenoic acid (DHA), have been found to promote the efficient electrical signaling between nerve cells, reduce inflammation, and even appear to improve mental concentration and fight memory loss.
In a 2014 study published in Neurology, researchers found that postmenopausal women who had higher levels of the omega-3 fatty acids EPA and DHA in their blood also had larger brain volumes, which was the equivalent of preserving the brain for an additional one to two years. Smaller brain volume has been linked to Alzheimer’s disease as well as the effects of normal aging.
Related: How to Stay Sharp As You Age

Because the body cannot manufacture omega-3 fatty acids, it needs to absorb them from food sources. Fish are one of the best sources of omega-3s, but try to avoid fish that are high in mercury and other heavy metals, such as swordfish and bluefish. Not a fan of seafood? There are many other non-fish foods that contain this brain protector.
Foods high in omega-3 fatty acids:

As your brain ages, it is more difficult for important nerve cells to protect themselves against highly reactive, rogue compounds called free radicals. Every cell in your body manufactures thousands of these unstable oxygen molecules every day, and you are also exposed to them in the world around you through tobacco smoke, pollution, and even ultraviolet radiation. Left unchecked, free radicals damage cells (a process called oxidative stress), which contributes to age-related degenerative diseases, including mental decline.
Fortunately, the body has a natural defense system to protect itself against oxidative stress: antioxidants. These substances, which help shield the body from the destruction of free radicals, include well-known nutrients such as vitamin C, beta-carotene, and selenium. Although researchers go back and forth on exactly how beneficial eating antioxidants can be for the body and brain, there are two antioxidants that appear particularly promising when it comes to brain health: flavonoids and vitamin E.

When someone tells you to eat more colorful foods, these special antioxidants are probably the reason why. Almost all fruits, vegetables, and herbs contain flavonoids, which have been found to have many health benefits, including reducing inflammation, heart disease risk, and eczema symptoms. Studies suggest flavonoids are good for the aging brain, doing everything from increasing the number of connections between neurons to disrupting the development of amyloid plaques that clog the brains of Alzheimer's disease patients.
In 2012, researchers at Brigham and Women’s Hospital found that older women who ate large amounts of berries – which are high in flavonoids – delayed their memory decline by more than two years compared to women who had low flavonoid consumption. Getting more flavonoids in your diet is pretty simple: The more colorful the produce, the higher the level of flavonoids. But you might be pleasantly surprised to learn that some of your favorite drinks are full of flavonoid goodness, too.
Foods high in flavonoids:

Vitamin E is well known as a free-radical fighter that prevents cell damage. While more evidence is needed, several studies have found that vitamin E delays the progression of mild to moderate Alzheimer’s disease. In a 2014 study published in the American Heart Association’s journal, Stroke, researchers found that one type of vitamin E, tocotrienol (found naturally in palm oil), may protect the brain from developing white matter lesions, which have been linked to increased stroke risk, Alzheimer’s, and Parkinson’s disease.
The benefits of taking a vitamin E supplement remains a point of contention among researchers, but there’s little doubt that the foods containing this antioxidant are good for you.
Foods high in vitamin E:


The Bottom Line on Brain Food

While no one has found a way to return aging brains to their youthful ability just yet, it is possible to strengthen your brain's ability to protect important neurons from degeneration or death. This is best accomplished when you make smart lifestyle choices. It's a good idea to avoid excess alcohol and nicotine use, and you can best help your brain stay sharp by following a healthful diet that's low in fat and cholesterol and loaded with fruits, vegetables, oils, and fish.
Posted by Unknown at 6:47 AM