Giant food conglomerate General Mills recently made an announcement that by the year 2017, all of its cereals will be free of artificial colors and flavors.
This is great news, considering so many of these cereals are marketed to children, and these ingredients have been shown time and time again to have serious potential hazards.
However, before you celebrate that artificial dye-free box of Trix that’s right around the corner, take note that just because these ingredients will be replaced doesn’t mean the cereals will be healthy or safe to eat — for children or adults.

According to General Mills spokespeople, 90 percent of the brand’s cereals will be free of artificial colors and flavors by the close of 2016. The rest will be free of the stuff by the end of 2017. Just a few of the cereals made by General Mills include Cheerios, Trix, Lucky Charms, Cocoa Puffs, Count Chocula, and Reese’s Puffs.
Certain cereals are proving trickier for the food manufacturers to “de-artificialize” than others. For example, Trix cereal will soon be sporting four colors instead of six. Lucky Charms, which contains an array of sugary colored marshmallows, is also proving a challenge.
As for the reason behind the shift away from artificial ingredients, the president of General Mills’ cereal division, Jim Murphy, stated:
“We’ve continued to listen to consumers who want to see more recognizable and familiar ingredients on the labels and challenged ourselves to remove barriers that prevent adults and children from enjoying our cereals.” Indeed, General Mills points to internal polls which state that 49 percent of US homes do not want artificial ingredients in their food.
As we have reported, artificial colorings are a health nightmare. A number of studies have linked these colorings to the potential for severe allergies, hyperactivity in children, and other behavioral changes. Some have even been linked to cancer in lab animals. It can safely be called an atrocity that these ingredients have remained in our children’s food for this long.
The truly good news to be gleaned from General Mills’ announcement is that major food corporations are listening — finally listening — to the public’s demand for both transparency and healthier ingredients.
The company has also announced that its manufacturers are to rid their products of trans fats by 2018 — another encouraging move. Other major food corporations, including Nestlé, Pizza Hut, and Taco Bell, have also announced plans to end their use of artificial ingredients. 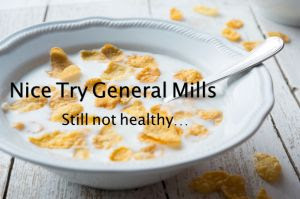 The bad news? As we’ve said before, a processed food is still a processed food. Even without the artificial stuff, these foods are made in large factories, with no love, and with a high risk of contamination. They will also continue to be made with cheap ingredients, many of which are unhealthy, and contain tons of sugar. Many will still contain various preservatives.
On top of that, so-called “natural flavors” are sometimes even more ick-inducing than artificial ones — and have often been so chemically processed that they do not resemble anything found in nature at all.
Yes, the major food corporations are trying — but they are trying to win back sales, not to truly be healthy. If you want to get your morning — and your kids’ morning — started off right, begin with a healthy breakfast of whole, fresh ingredients from the Earth — not something poured out of a box.
-The Alternative Daily
Posted by Unknown at 9:47 AM