Fight Fat With An Apple a Day

Apples contain compounds that are non-digestible, which promote an increase of good bacteria in your gut and can help you to lose weight.
Fiber and polyphenols
The non-digestible compounds in apples are fiber and polyphenols. These compounds end up fermenting in the colon, which turns them into food for good bacteria. This favorably tips the balance between good bacteria and bad bacteria, which lives on junk food.
Chronic inflammation has been linked with increased risk of obesity; by restoring the microbial balance you reduce that inflammation and boost the feeling of fullness. The effect on gut bacteria from eating an apple a day
In a study by Washington State University, a research team studied the effects on gut bacteria from daily apple consumption, noting that few studies have investigated the role of bioactive compounds in apples and their effect on friendly gut bacteria. Good bacteria in the gut are known to play a role in boosting immunity and assisting in body weight maintenance. It was also noted that not many studies looked at the differences in those effects among varieties of apples.
The research team, led by food scientist Giuliana Noratto, looked at bioactive compounds from seven apple varieties including Braeburn, Gala, McIntosh, Granny Smith, Fuji, Golden Delicious, and Red Delicious. These bioactive compounds were tested on mice with diet-induced obesity to determine their effect on good gut bacteria.
Researchers studied the proportions of bacteria present in the feces of the obese mice and compared it to those in the feces of lean mice. What they discovered was that after feeding a daily apple to obese mice, the proportions in both were very similar.
Not all apples are equal 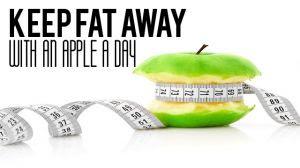 Findings also showed that Granny Smith apples had the most significant beneficial effect on good gut bacteria. This is largely because they possess a high quantity of polyphenols and non-digestible dietary fiber, as well as being low in carbohydrates.
Despite being thoroughly chewed and exposed to digestive enzymes and stomach acid, the compounds are minimally damaged when they enter the colon. As the compounds are fermented in the colon by bacteria, they produce butyric acid, which encourages the growth of more good gut bacteria.
The fight against obesity
By the latest estimates, 27 percent of American adults are obese. Obesity greatly increases the risk of medical conditions such as cancer, stroke, heart disease, and type 2 diabetes.
“Obese people have an out-of-balance gut,” said lead author of the study Giuliana Noratto. “So changing our gut bacteria via what we eat, making it similar to that of a lean person, could help prevent weight gain.”
Noratto went on to say, “we know that, in general, apples are a good source of these non-digestible compounds, but there are differences in varieties. Results from this study will help consumers to discriminate between apple varieties that can aid in the fight against obesity.”
Have you had an apple today?
-The Alternative Daily
Posted by Unknown at 11:48 AM