At a certain age, women experience strange symptoms and presume menopause is to blame, or simply chalk it up to hormone issues. In truth, there are other health problems that can cause symptoms similar to menopause even though they are unrelated.
Adrenal fatigue
Long-term stress, and the frequent rushes of adrenaline that often accompany it, can lead to a whole myriad of strange symptoms, which can sometimes be misdiagnosed as hormone-related.
Symptoms of adrenal fatigue are chronic exhaustion beginning as early as the morning, and difficulty focusing attention to complete tasks.
Acute liver failure
Acute liver failure is the loss of liver function that comes on very quickly, even in people who are otherwise healthy. It can be caused by damage from prescription medications, acetaminophen overdose, herbal supplements, hepatitis, toxins, and cancer. Acute liver failure is life-threatening, and symptoms should be evaluated by a physician. Symptoms can include the following:
Food-related allergies
Inadvertently eating foods you are allergic to causes inflammatory responses in the body. Food allergies are commonly triggered by gluten, dairy, MSG, and artificial colorings or flavors.
The symptoms usually happen anywhere from immediately to within an hour after eating the food. The responses can cause a variety of common symptoms:
More serious cases that involve anaphylaxis can manifest in symptoms such as these:
Thyroid issues
Overactive or underactive thyroid can cause several symptoms: 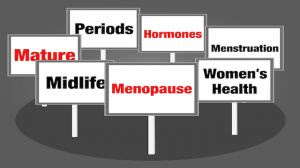 On the surface, these symptoms sound pretty typical for menopause, and yet they are completely unrelated. For women, in particular, symptoms from thyroid imbalances often occur together with the onset of heavy, irregular, or loss of menstrual periods, which in turn leads to misdiagnosis.
One such woman named Janet recounted her experience, “The gynecologist gave me hormone samples to try for three months. I was still having heavy periods, and nothing felt better, so I went back. I got another type for three months. Four times I went and tried different hormones. Then I had a hysterectomy. I kept gaining weight. My hair was falling out. I felt out of control. I said, something is not right here. Finally, after the hysterectomy, a doctor diagnosed me with hypothyroidism.”
Toxicity from heavy metals
There are many toxic heavy metals in the environment that end up absorbed into the body and accumulate over time. This accumulation can then lead to illnesses or strange symptoms. These metals include copper, aluminum, arsenic, cadmium, lead, and mercury.
The symptoms of heavy metal toxicity can sometimes be vague and difficult to diagnose. They are frequently misdiagnosed as autism, depression, chronic fatigue syndrome, and more.
Symptoms of heavy metal toxicity can include the following:
So if you’re experiencing symptoms that could be attributed to the onset of menopause, be sure to first check with your healthcare professional and explore all other possible causes.
—The Alternative Daily
Posted by Unknown at 8:10 AM