The Importance of Darkness to Your Health 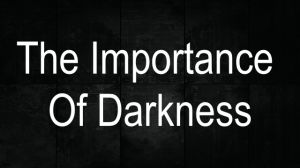 So, we’ve established that darkness is essential for sleep — but do different types of light affect us differently? Absolutely. Research has shown that blue light — such as from the sun and fluorescent lights (think your tablet and cell phone) — keeps us awake the most.
On the other hand, red and yellow lights (from candlelight, and incandescent light bulbs) are naturally dimmer, and do not affect circadian rhythms as severely as blue light. While darkness in the bedroom is always best when trying to sleep, if you have alarm clocks or hallway night lights, you may want to keep them in this spectrum.
Getting back into the natural rhythm
How do we get back in line with our natural circadian rhythms? Here are a few tips to consider:
Take a camping trip! Being away from artificial lights, even for a couple days, can have an immensely positive effect — as long as you don’t take your electronics with you! A 2013 study published in the journal Current Biology studies this effect, and found:
“Electrical lighting and the constructed environment is associated with reduced exposure to sunlight during the day, increased light exposure after sunset, and a delayed timing of the circadian clock as compared to a summer natural 14 hr 40 min: 9 hr 20 min light-dark cycle camping. Furthermore, we find that after exposure to only natural light, the internal circadian clock synchronizes to solar time.”
Make sure your bedroom is as dark as possible. You may want to experiment with curtains, window shades, or even an eye shade. Keep electronic devices out of the bedroom — they’ll do nothing but keep you awake.
Go to bed half an hour earlier. As it takes most people some time to fall asleep, giving yourself an extra window to make sure you get a full seven hours actually snoozing is key.
Turn down the heat. Sleeping in a cooler bedroom (below 70 degrees F) is linked to promoting restful sleep. Plus, it may help to activate brown fat, a metabolically active type of fat that actually increases your body’s rate of calorie-burning.
Make sure your sleep position isn’t affecting your snoozing time — check out our article and see if your preferred position is working for or against you.
There’s an app for that. Check out these nifty sleep apps that have been developed for the singular purpose of promoting quality sleep!
Above all, don’t forget to turn off the lights at night — and get out of the city once in a while — it’ll do your mind and body some serious good! Nature is the ultimate healer.
—The Alternative Daily
Posted by Unknown at 9:43 AM