Anyone who has ever enjoyed a traditional Indian meal, made with care and love, knows how truly special this cuisine is. The distinctive flavors, aromas, and textures of Indian dishes do more than just excite the taste buds… many have some superstar healing properties, as well.
The following are five reasons to bring more quality, homemade Indian food into your life, and onto your dinner plates!

A rich history of medicinal use
According to the authors of a new study performed at the Indian Institute of Technology, which analyzed over 2,500 traditional Indian dishes, the ingredient combinations in many Indian meals may have started out being concocted for medicinal purposes, not culinary. The study authors wrote, “We conclude that the evolution of cooking driven by medicinal beliefs would have left its signature of traditional Indian recipes.”
So, this may explain why some Indian dishes make you feel soothed, some clear your sinuses, some soothe tummy trouble, and some are highly energizing—they were designed that way from the start.
“Negative food pairing” works
Through their analysis of Indian dishes, the researchers who performed the new study also discovered that many of the flavor combinations in Indian food go against the culinary principle of “food pairing,” in which similar flavors are placed together in a recipe. Instead, the ingredients and spices often combine to create a “negative food pairing.”
Despite what culinary wisdom may dictate, this “negative food pairing” really works to create some of India’s most distinctive tastes… perhaps proving that opposites attract, or at least intermingle?
All that spice
According to the researchers, “Our study reveals that spices occupy a unique position in the ingredient composition of Indian cuisine and play a major role in defining its characteristic profile.” Fortunately for your health, many of these spices are also superfoods.
Turmeric, hot peppers, coriander, and cumin are just a few of the remarkably healthy spices featured in Indian cuisine. 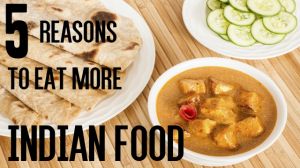 Homemade curry can warm you right up
Homemade Indian curries feature many “warming” ingredients, spices, and flavors, and often animal bones, which provide minerals, gelatin and collagen. This combination can really hit the spot if you’re feeling chilly or a bit under the weather—find the right curry and it’ll heat you right back up.
It may boost endorphins
All the fiery chili peppers that are featured in many Indian curries and other dishes have been linked to boosting endorphins – and this in turn can boost your mood, provide energy, and make you feel all-around great!
When searching for the perfect Indian meal, just remember that great food of any variety depends on high-quality, preferably organic ingredients, grass-fed meats, and care in preparation. If there are no restaurants that meet these standards in your area, consider taking an Indian cooking class and making your own!
-The Alternative Daily
Posted by Unknown at 9:39 AM