Science Shows That Men Lose Their Memory Before Women

While decline in memory function is something that happens to everyone with age, it has been shown that it happens earlier to men.
At the Mayo Clinic and Foundation in Minnesota, a recent study was conducted on a group of 1,246 participants between the ages of 30 and 95. The purpose of the study was to reach a better understanding of memory decline in later life.
According to Dr. Charles DeCarli, M.D. a neurologist with the Department of Neurology and Center for Neuroscience, University of California, who wrote an editorial published with the study, “Understanding the basic biology of these early processes are likely to substantially inform us about ways in which we can maintain cognitive health and optimize resistance to late-life dementia.”
The study participants were administered standard memory tests, along with two brain scans that included an MRI and a PET scan to measure the volume of the brain’s hippocampus and to check for amyloid buildup. Findings of the study revealed that the memory storage area of the brain, the hippocampus, usually begins to shrink from the age of 30 in both genders. However, the decline was found to be more rapid in men.
“A decline in memory is something that happens to everyone,” said study author Dr. Clifford Jack Jr. of the Mayo Clinic and Foundation in Minnesota. “This type of decline happens in other organs of the body, so why shouldn’t it happen with the brain?” 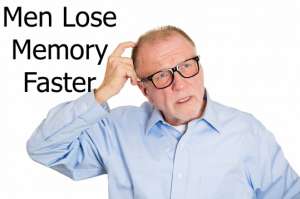 Memory Loss Doesn’t Necessarily Mean Dementi
Another significant finding of the study was that memory decline appeared to be a part of the natural aging process. Instead of being linked directly to the accumulation of brain “plaques” as seen in patients with Alzheimer’s disease.
“There seems to be a profound effect of aging, itself, on memory—independent of amyloid,” Jack said. “We think that [amyloid] pathology tends to arise late in life, to accelerate a pre-existing decline in memory.”
It was found among the participants of the study that memory and brain volume declined between the ages of 30 and mid-60s, without any apparent amyloid buildup. The amyloid buildup or plaque wasn’t seen until around age 70.
The Difference between Genders
While it is still somewhat unclear as to the reason for the difference in memory decline between men and women, some hypothesize it could be related to the female hormone estrogen.
It is also suspected that the higher rate of cardiovascular risk among men may be responsible for increasing their memory problems. As Jack explained it, health conditions like stroke, heart disease, and high blood pressure can lead to impaired blood flow to the brain. Decreased blood flow to the brain could explain the shrinkage of tissues over time.
-The Alternative Daily
Posted by Unknown at 9:41 AM