Turmeric vs. Curcumin: Which Is More Effective?

You’ve probably heard about the amazing benefits of turmeric. This warming, earthy spice is deeply rooted in the preventive wellness practices of traditional Chinese medicine and Ayurveda. It has some impressive effects:
The primary active constituent in turmeric has been identified by medical researchers. It is called curcumin, and is part of a family of molecules called curcuminoids. You may have wondered whether using pure curcumin could be more effective than the whole turmeric root.
In the Western world, once we have discovered the active ingredient of a substance we like to isolate it, and assume that consuming more of the active ingredient by itself will allow for even more benefit. This is actually a common process by which many modern medicines have been developed—isolating and refining an ingredient found in nature.
Singling out an active ingredient is a favourite activity of today’s medical community, and is even required by the FDA in order to be allowed to make health claims about a substance. They require the “source of the beneficial activity” to be pinpointed, in order to prove the activity of the substance is well-enough understood to be released for FDA-endorsed use. Studies have been performed to determine whether turmeric or curcumin is more effective. In one study, mice were used to test the anti-inflammatory and gene-regulatory activities of both turmeric and curcumin. The results supported the hypothesis that “a crude extract of turmeric is more effective than the purified compound curcumin in curing human ailments” because it offers the full spectrum of curcuminoids.
Another study also emphasized the role of synergistic effects of other constituents of turmeric extract on the antioxidant activity of curcumin.
As you can see, using the complete turmeric root is better than removing the most active compound and consuming it in an isolated state. The whole root contains co-active molecules, ones that work together for the most benefit.
It’s also worth noting that there are ways to make your complete turmeric even more effective with other foods that help the body absorb it. 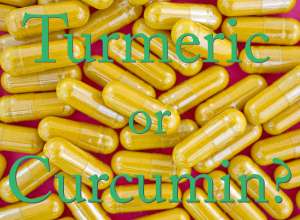 Black pepper (with its active chemical piperine) is one, and cayenne pepper (capsaicin) is another. One study showed that turmeric and cayenne pepper were each individually beneficial for the reduction of cholesterol oxidation, liver toxicity and inflammation, but the beneficial effect was greater when they were consumed together.
Another important consideration is that curcuminoids are fat soluble. Any fat soluble nutrient or vitamin should always be consumed with another food containing fat, so that it can be most effectively absorbed.
This is why “golden milk” made with turmeric is a common traditional remedy in India—the fat in the milk helps the body to uptake the beneficial components in the turmeric and other spices. Using turmeric in a curry with coconut milk and ghee is also a great way to consume it with helpful fat.
It’s fascinating to see how nature has already given us the best complete solutions, with plant medicines that work best in unadulterated harmony rather than in isolated extracts, and with spice combinations that taste delicious on the palate but also amplify their benefits.
-The Alternative Daily
Posted by Unknown at 2:29 PM