Lycopene and Kidney Cancer: Another Reason for Older Women to Eat Tomatoes

What makes those beautiful, bright pink and red fruits, such as watermelons and papayas – not to mention tomatoes – red? It’s lycopene, a carotenoid antioxidant that has been receiving quite a bit of attention lately for its connection to the prevention of atherosclerosis, heart disease and certain cancers.
Now, to add to the list of reasons to eat more of this yummy produce, researchers at Wayne State University Division of Research have linked eating more lycopene-containing foods to a lowered risk of renal cell carcinoma, a cancer of the kidney, in postmenopausal women.
Kidney cancer is the eighth-most common cancer in women. One particularly scary fact about this cancer is that by the time it is spotted, it has often progressed to an advanced stage. This makes prevention especially key when it comes to this illness.
To arrive at their results concerning lycopene and renal cell carcinoma, Wayne State researchers, led by Dr. Cathryn Bock, analyzed the health information of just over 96,000 women, collected between 1993 and 1998. The women in the study were followed until the summer of 2013, and the presence of several antioxidants, lycopene included, in their diets was assessed. Results of the analysis showed that the women who ate the most foods rich in lycopene had a 39 percent lower risk of developing kidney cancer than the women who ate the least amount of foods containing lycopene. The other antioxidants and nutrients tested in the study did not display a significant effect on kidney cancer risk. 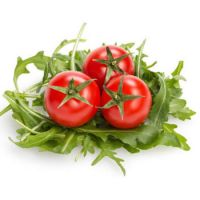 But wait… it’s not just women who may want to amp up their intake of tomatoes. A 2014 study performed by the University of Bristol found that men who eat over ten servings of tomatoes per week have an 18 percent lower risk of prostate cancer. Perhaps we could all use a little more lycopene.
As far as eating to prevent a specific illness, Dr. Bock had the following to say: “Kidney cancer is a relatively rare cancer, and so focusing only on reducing risk of this disease would be short-sighted. Rather, a diet focused on one’s own personal risk factors, such as family history, would be more beneficial.”
With diet, it’s all about the whole picture. Lycopene alone is no magic pill. However, as part of a varied diet of whole, nutritious foods prepared with love, it may just help our bodies stay healthy.
Along with the obvious tomato and watermelon sources, lycopene can also be found in pink grapefruits, papayas, apricots and guavas.
-The Alternative Daily
Posted by Unknown at 9:53 AM